Hakkendo was opened in 2010. Since its establishment, we had provided numerous art exhibition plans and works as an art dealer to art galleries and galleries of famous department stores nationwide, based in Ginza.
Then, in February 2015, the first gallery was opened in Setagaya Monozukuri School (iiD) in Ikejiri with the aim of becoming a "window to the world of art" so that local people can easily get familiar with the charm of art. However, we have held a special exhibition every month.
In 2012, writers who will lead the next generation of the art world run the project "Misan -KENZAN-" to create their own art environment, and from 2016, the work was handed over to the general incorporated association JIAN. We are working hard every day to discover young talents and find places for activities.
And from April of this year, the gallery will be moved from Ikejiri_Ohashi to Kyobashi. We look forward to welcoming you.

Exhibitions and Events During TAA 2022 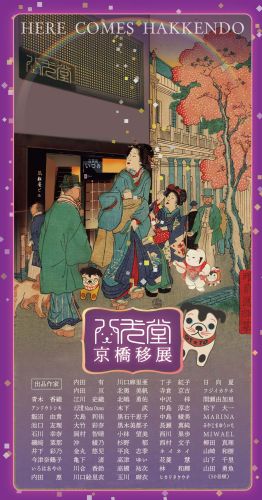 HAKKENDO Gallery, which has been working with many artists since 2010, will hold a lively exhibition suitable for the Kyobashi relocation commemorative exhibition in order to make further progress with them.
Many antique-themed works will be exhibited.